Keep the following questions in mind as you read Jeffrey Jerome Cohen’s, “Noah’s Arkive.” The questions are designed to guide your reading practices and our class discussions. You are not required to provide formal answers in class or online.

1. According to Cohen why are humans such “experts at imagining end times” (par 1)? What problems does apocalypse solve? How have representations of apocalypse changed over time?

2. Let’s try to answer the question that Cohen puts to his audience at the start of the post, “But as we brace for denouement in storm and tempest, what does our apocalyptic imagination unveil about the limits of our environmental frames, the limits of the stories that we tell?” (par 1)

3. How does Cohen define ‘ark’? What are some examples he gives? Can you think of more examples?

4. Why is ark building a natural response to (impending) catastrophe?

5. Why is ark building, in any of the contexts Cohen cites, always going to be a failed project? OR, put another way, why is Cohen more invested in what is left behind than what gets included an ark?

6. Why do we keep returning to biblical frames to imagine the future?

7. What does Cohen mean when he says, “Climate change requires more and better stories than the ones we have been telling” (par 4)?

8. What’s the story of Noah’s Flood? According to Cohen how has/does that story get read? How does Cohen read the long history of Noah’s Flood stories as “a source for counter-narratives that do not make of a coming Flood untroubled waters” (par 4)?

9. Who are Robert Graves and Didier Madoc-Jones, The blogger Burrito Justice, Jeffrey Linn? How do these designers envision the final effects of climate change? How/why does Cohen suggest we should shift away from this imaginative work?

10. Take a minute and think about the image below and then consider some of the following: who’s the audience for this image? Describe the point of view the photo renders. What does this image of the future suggest is missing from our present? 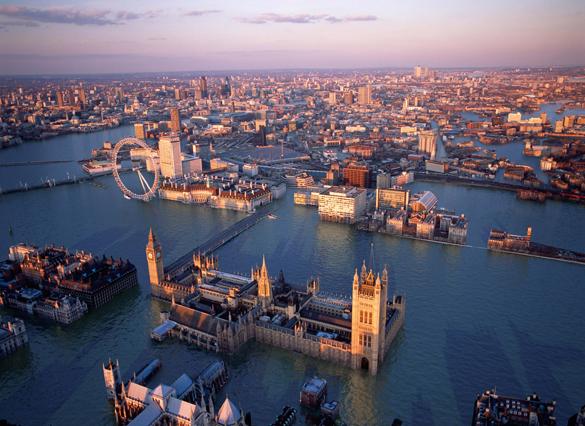 Postcards from the Future, Robert Graves and Didier Madoc-Jones

11. What sorts of social relationships do floods, ironically, reveal even as the cover over cities and countrysides?

12. What are some details from the Noah story that Cohen recounts, but often are left out of the simplified/children’s version of the story? Why do you think the story of the Flood is such a mainstay of children’s fiction?

13. What are some contradictions that Cohen points out in the Noah story? What does the etymology of the terms suggest for Cohen?

13. Consider the series of illuminated illustrations that Cohen includes in his post—what’s the relationship between the manuscript images, such as BL Harley  4381 f. 12 and BL Royal 14 B IX, and the story of the flood? What choices do the artists make in the “translation” of the biblical story into images?

14. Why doesn’t Noah in the BL Royal 2 B VII  f. 7  and BL Add MS 47682 realize that the Devil stowed away on the Ark? Why doesn’t he consider the staggering loss of all the other life I the world? What would it take for him to realize?

15. Compare the illustration of the Flood below, drawn by William de Brails in the 13th c., to the image of flooded London above. Why/how does “He provides what’s missing from those pictures of a submerged London, Seattle, New York as seen from the sky” (par. 16)?

16.In Cohen’s final assessment,what is the value of an ark? 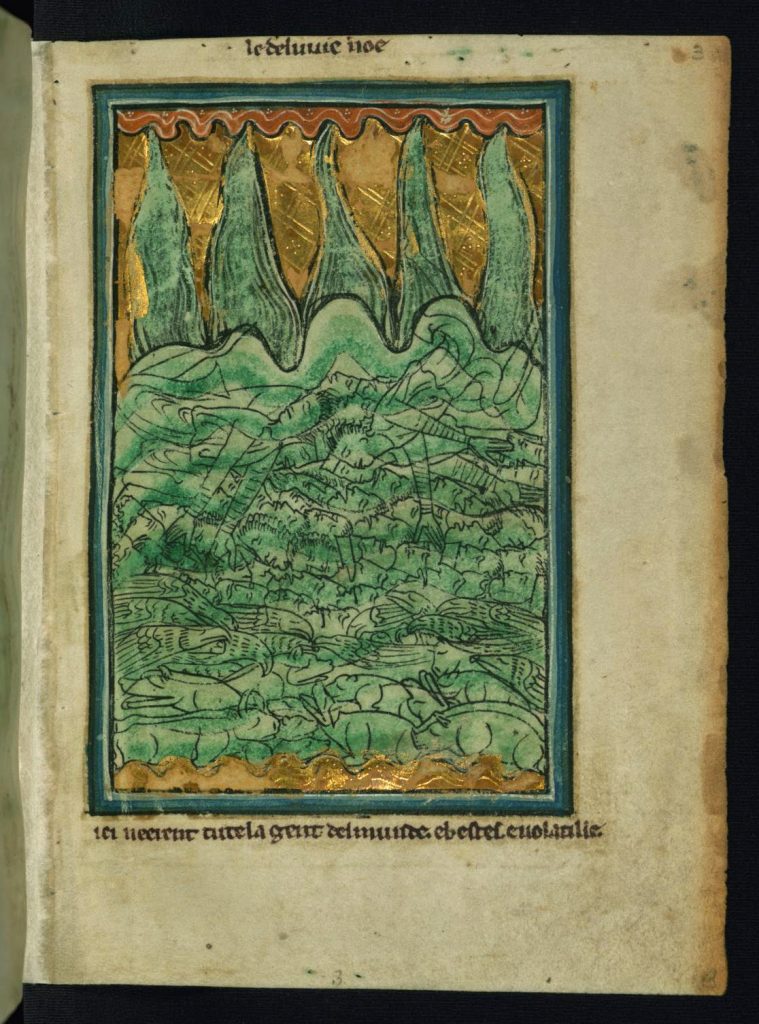